“The Scandinavian governments have been a major factor in moving generations towards digital communication.

For example, in Denmark as a citizen you must communicate with all official organs through digital channels. This has forced older generations to learn some basic skills, just to be able to read post from the hospital, for example, and has provided motivation for people to learn to help themselves.

Everyone should be able to participate in ever-changing modern society.

It is necessary for all to use technology, especially communication technology and channels, which can give a strong voice to dedicated groups. It does not matter if it is a question of abusing women, beating children or not taking care of educating and caring for the older generation – everyone should be able to participate in ever-changing modern society.

Learning itself it is best done in small groups, in short sessions where you start by explaining that it is not dangerous to push the buttons and that talking together on a social media channel is essentially no different from talking on the phone or sending a postcard.

I have had very fulfilling experience of working with the group 65+, both women and men. When they realised how easy things were, they learned quickly and willingly. It is overcomplicating things that is the problem.

Learning itself it is best done in small groups, in short sessions where you start by explaining that it is not dangerous to push the button.

I have run courses at the Continuing Education Centre at the University of Iceland and Akureyri, for example, and I think it would be time to start producing online courses where learning would happen step-by-step. What is important is to “talk the same language” and not move too fast.

I have many personal stories as well. The best one is my mother. She turns 86 this year and communicates and participates on Facebook. Lace-making is one of her big passions. She started learning Spanish, using Duolingo, to be able to better understand her Spanish friends in the different lace-making groups she frequently visits on Facebook.

She also has her own YouTube channel where she has learned to create playlists for different interests, and she behaves like a teenager. She cannot go to sleep because she immerses herself in watching the videos. She has also become an excellent teacher for her 80+ friends, showing them how to use Facebook.” 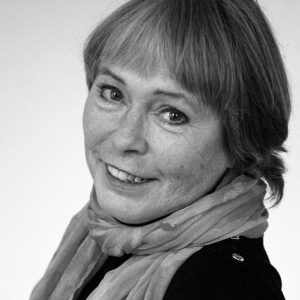